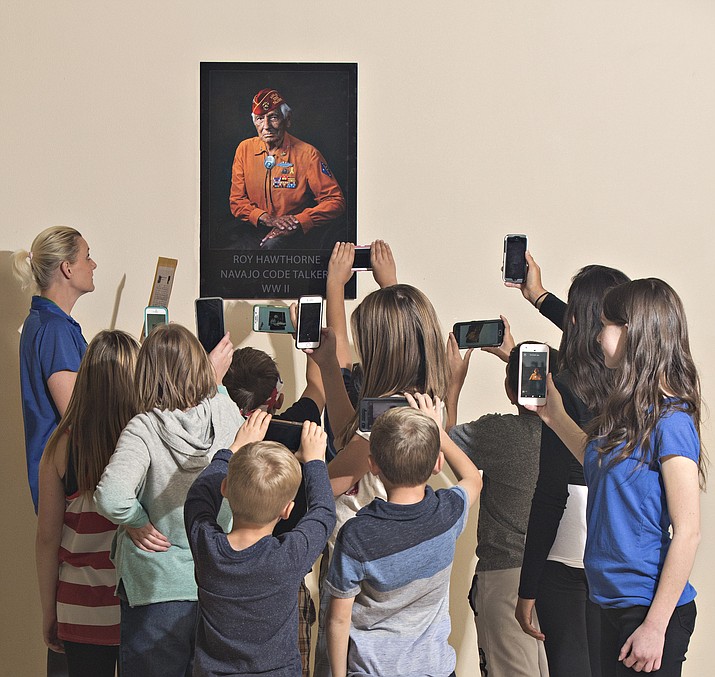 Vision of Vets was featured in an article about augmented reality by the Prescott Daily Courier.

Augmented reality comes to region: Technology of the future already here, not sure yet where it’s going

Some Prescott-area residents have already given these questions serious thought and have begun working on not only explaining the technology, but also putting it to use and even trying to advance it.

For starters, some definitions.

Virtual reality: The computer-generated simulation of a three-dimensional image or environment that can be interacted with in a seemingly real or physical way by a person using special electronic equipment, such as a helmet with a screen inside or gloves fitted with sensors.

Augmented reality: A technology that superimposes a computer-generated image on a user’s view of the real world, thus providing a composite view.

A few years ago, these were still very foreign concepts to most of the world. Today, they have already crept their way into the Quad Cities through various means.

As of mid-September, the Prescott Valley Library got its hands on an Oculus Rift set, one of the more well-known virtual reality systems on the market.

“It’s actually on loan from the state library, so it’s not permanently here, but it is here until December and it’s very cool,” said Shelbie Marks, Prescott Valley Library’s teen librarian.

Marks officially set the system up in the library’s digital media lab on Monday, Oct. 2, where it is now available for use by anyone with a PV Library card. It will also be available for general public use every Tuesday from noon to 2 p.m. from now until Dec. 1.

A Vietnam veteran and skilled photographer, Roscoe is working to develop a book titled “Portraits of Courage and Conviction.” In the book will be portraits he has taken of veterans and reenactors who are featured to help explain various wars dating back to the 1700s.

Each of these portraits will have the capability to come alive when scanned by a smartphone application called Live Portrait.

The technology blends augmented reality with image recognition to create images that come to life and tell a story.

Part of why Roscoe has chosen to go this route with his book is to get children more engaged with history.

“I was told by the American Autism Association that a lot of children learn better visually,” Roscoe said. “Schools don’t teach history much anymore, and I’d like to bring it back.”

Helping him with this effort is Lisa Pasalich, a teacher at Granville Elementary.

Her sincere interest in history and the American military has led her to partner with Roscoe in not only creating the book, but testing the Live Portrait technology in her classrooms.

So far, it’s been very successful, she said.

Hoping to instill such fervor into the broader community using augmented reality technology is the Prescott Western Heritage Foundation.

Made up of volunteers, the foundation hopes to open a physical center within about a block of downtown Prescott by Memorial Day 2018.

Similar to a museum, the center would provide general information about Western history.

To make it more of a destination location, Dennis Gallagher, Founder and President of the foundation, intends to fill the center with interactive activities.

“We want to combine our history with modern technology,” Gallagher said.

Gallagher anticipates some of this to come in the form of holographic imagery and augmented reality.

“We were talking about being able to lock onto a building or photograph using various devices and overlay something over them,” Gallagher said. “Like for the great Prescott fire, you could take a photograph of Whiskey Row prior to the fire and use the technology to have the fire laid over it.”

Looking to the future

Looking to the future of this technology is Embry-Riddle Aeronautical University (ERAU).

To prepare students for high-demand careers in virtual reality, computer gaming, animation and aviation simulation, the university has just launched a new bachelor of science in simulation science, games and animation at its Prescott campus.

“The focus of our program is we’re trying to prepare students so that they can create the experiences of the future,” said Dr. Ashish Amresh, professor of simulation science and program chair for the new degree.

The idea is to teach their students all of the fundamentals of animation, 3D gaming, simulations, virtual reality and augmented reality, and then set them free on creating new ways of using this technology.

“We’re trying to move beyond static digital interfaces like tablets, phones and laptops,” Amresh said. “We’re trying to go directly into the world and see data around us like we’ve probably never seen it before.”

Predicting what exactly this will look and feel like is virtually impossible.

“We don’t even know what’s going to come out of it,” Amresh said.