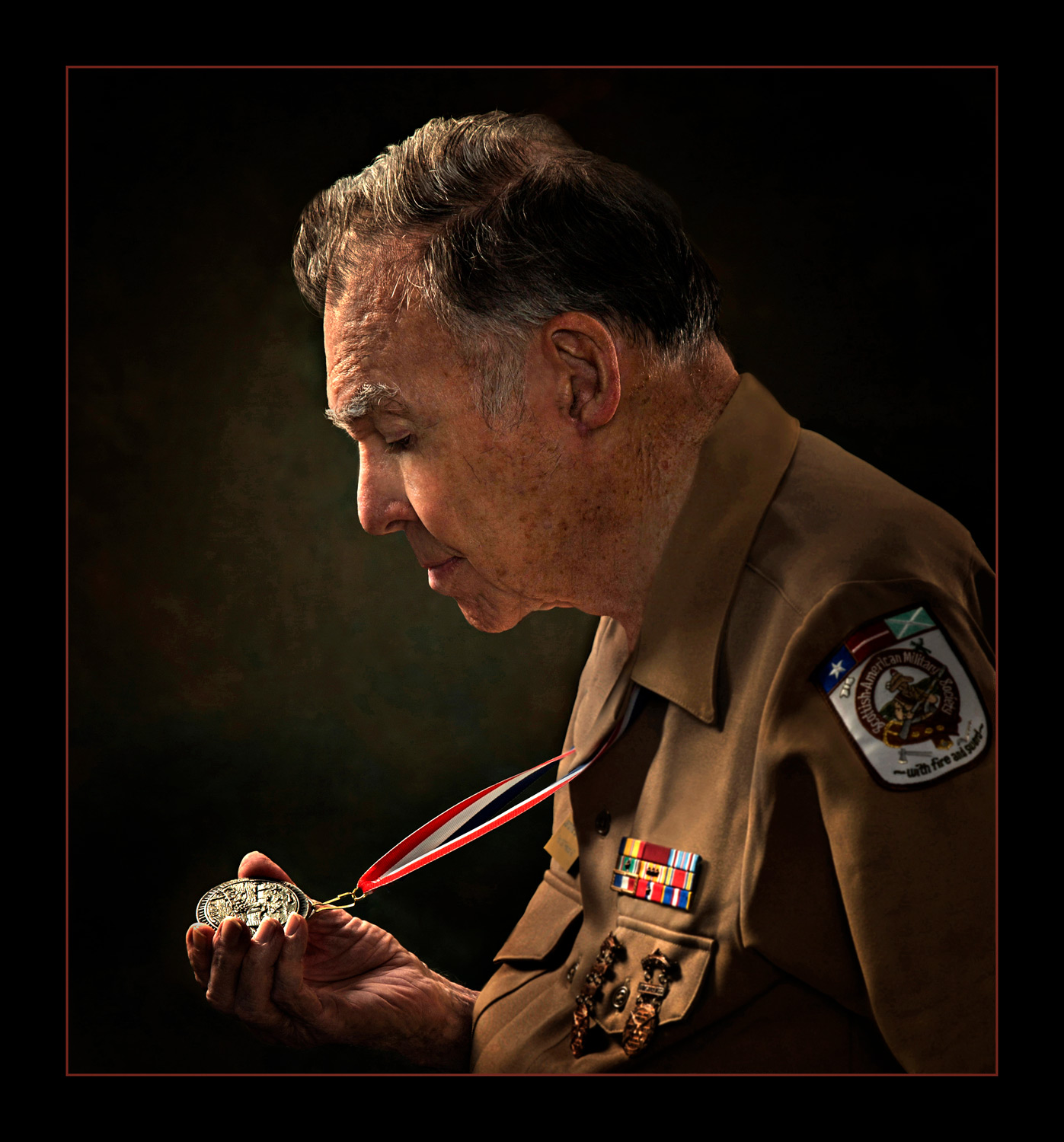 The Prescott Daily Courier featured Vision of Vets in an article about creating living portraits of veterans.

Download a free app, aim your cellphone or tablet at an image, and watch the still photo come to life in video format.

Babies, pets, sports, weddings – viewers can watch the action take place immediately – almost like when paintings in the Harry Potter books come to life inside their frames.

Prescott Valley photographer Bruce Roscoe said he is the first person to create a living portrait of a veteran with PV resident Jerry Welna, who fought during World War II. Roscoe printed Welna’s photo, which has the Live Portrait metadata embedded, on business cards.

Once people have downloaded the free app, they point their cellphones at the card, wait for the video to load, and watch Welna’s profile turn to face the viewer as he begins to speak. His brief story of serving in WWII is interspersed with vintage video from Normandy and Pearl Harbor, edited by Norman Fisk.

“It’s amazing. There’s no limit to how this can be used,” Roscoe said.

He first heard about the company, Live Portrait, at a photography seminar and immediately thought the application was perfect for his Vision of Vets enterprise.

“We are losing World War II veterans at a high rate. I thought, if we can’t get his story out, it’s going to be lost forever,” Roscoe said of Welna.

At the same time, he realized children are not learning as much history. He stopped at Granville Elementary School in Prescott Valley on his way home and spoke to school officials, which led to bringing Welna to the school’s Veteran’s Day event this year.

At the presentation, Welna’s photo on the big screen turned “live” as the two-and-a-half-minute video played. The screen went up and Welna walked out on stage. Roscoe said it “blew everybody’s mind; you wouldn’t believe the emotions that came out with the kids and the other veterans in the audience.”

The magic happens, Nunn said, when their software analyzes the printed image and links it with the video files, matching the model against images already in Live Portrait’s database, to “unlock” the image.

Almost any business can use this product for such things as selling real estate, conducting pet adoptions, or promoting events. Companies using this in their advertising can keep track of the number of times their image/photo has been scanned.

Think what could be done with high school yearbooks, Roscoe said, or with the elderly.

“After mom or dad passes away, their children and grandchildren can click on the portrait and listen to them again,” he said.

The website has examples of a cheerleading squad, a holiday card with two young sisters, an aspiring musician, and an ambitious young actor. While 2.5 minutes is the recommended maximum video length, Nunn said the shorter the video, the faster it loads in the app.

Roscoe, who photographs combat veterans for Vision of Vets, hopes to use this technology to help keep history alive by allowing veterans to tell their stories for future generations to view.

“I think, in our own little way, we can bring patriotism back and let people know that freedom isn’t free,” he said.