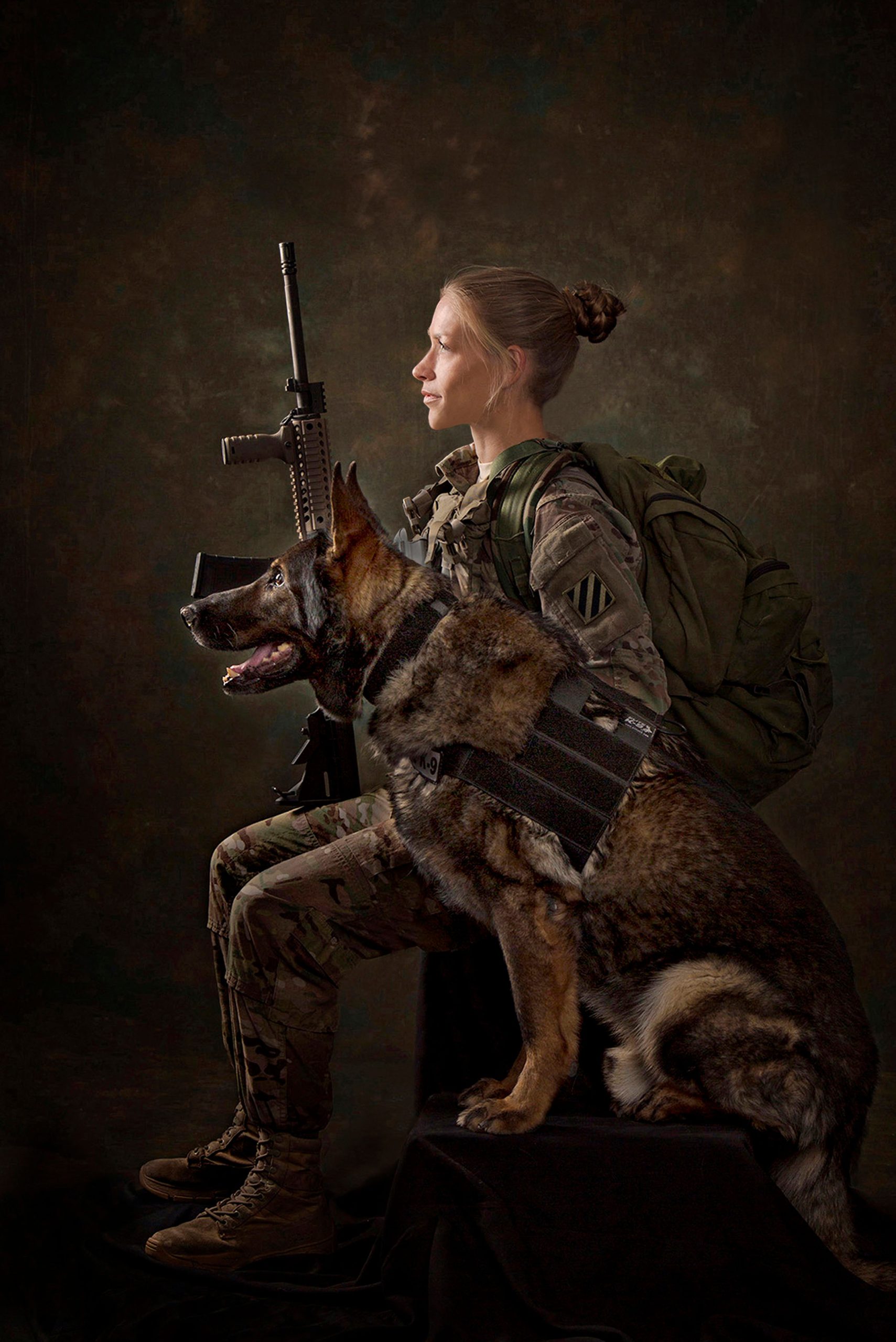 Vision of Vets had the honor of capturing Jessie Keller and Chrach together in a portrait. They have an incredible story.

Read more about Jessie and Chrach below:

Sgt. Jessie Keller, K9 handler, talks about her experience in war
One woman’s story of military and working dogs

To train as a U.S. Air Force airman is a demanding experience. Being one of the few females working in the K9 program is even more challenging. And serving in the Middle East can be a heartbreaking endeavor.

Tech. Sgt. Jessie Keller, U.S. Air Force, planned to go to college after high school graduation and then find work with animals. Instead, she entered the Air Force with a goal of working in the K9 program.

Keller served 13 years on active duty before going into the Reserves, where she is today. She has been deployed seven times – five times to Iraq, and two times to Afghanistan.

Keller found challenges along the way – being female in a traditionally male field had its struggles.

“There wasn’t a lot of females to talk to, and I was kind of an outcast. So immediately coming into any kind of unit with all men, they kind of looked at me as a weakness. I had to prove myself, and I had to really dig deep for them to understand I was there to be a good teammate,” she said. “At the same time, they put me through challenges that really shaped my strength as a female, and I was accepted as one of their brothers. So I wouldn’t take any of that away.”

Knowing that it would take five years to get into the K9 program, Keller explored other jobs within the Air Force such as field radio telephone operator, driver, and shooting the big “fun guns,” the 240 Bravos.

Working with animals is probably the most rewarding job a person can have, she said. Being a dog handler in the military has been the best career and the most dearest to her heart.

“It’s a job that many people can’t understand unless you’ve had a dog actually save your life,” she said.

ALL ABOUT THE DOGS

A lot of people look at dogs as cute, cuddly things that greet its owner at the door, Keller continued.

“My dog wasn’t a dog,” she said about her military work dog or MWD. “We really don’t like to use that term or the word animal. We say it’s our partner. These four-legged partners were there to save us. They went in day in and day out when we were exhausted as humans. But the dogs will go in. They were so excited for life and to work, all for a toy, really, and for the interaction between their handler. They just wanted to play.”

While deployed, Keller worked on missions “outside the wire” where she was typically the only female. In the midst of terrorist activity, everything going on was “very tricky.” She learned to recognize when something was wrong in her environment by watching the way her K9 looked or reacted.

“No matter what type of training you had, no matter how many skills you had, it was kind of the luck of the draw. Are you going to step on a pressure plate that had an explosive attached to it?” This is what Keller lived with during her deployments.

One mission took her and MWD Chrach (pronounced “crash”) into an area where a four-person unit had been blown up. She and Chrach were sent in to help find the bodies and also search for the people responsible for the deaths.

“I worked with this team numerous times and it was heartbreaking for this camp. It was probably one of the most heart-wrenching times I’ve ever been out with combat. As soon as we landed I saw my team just standing there waiting. They were so excited to see the dog. I don’t know if it was because they were excited the dog was there or if it was because of what we were going to do and that we were there to try to help them out,” she said.

Ultimately, they found the bodies, some weapons and bomb-making materials that day. “We paid our respect, we feel, to the team we lost,” Keller said. “And working with that team and having Chrach greet them right away was probably one of my most memorable moments.”

The K9 partners often have more than one handler who all work together and gain knowledge from each other.

One of Chrach’s biggest accomplishments was when he was assigned with Special Forces and went out on combat patrols. He located about five IEDs – improvised explosive devices – that weighed out to be about 170 pounds, Keller said.

“This dog not only saved a good friend of ours, he also saved the teams behind him and the teams behind that. He found explosives that were ready to detonate if they were to step by. If the team did not have the dog, they would have died,” she said.

Keller worked with another MWD partner, Oscar, who was badly injured by an explosion. Although Oscar performed his duty immediately after the device went off, he was soon retired. Keller credits both Oscar and Chrach for saving her life.

“You go out every day and you’re worried you might step on something. No matter how good the dog is or how good your team is, you could have been chosen that day where you set that device off. That was probably the hardest part,” she said. “Sometimes it’s just the luck of the draw. So every day I knew that I might not come home. That makes you think a little differently and you take things a little bit lighter in life.”

Chrach retired and lived with former Air Force airman Kyle Alltop; he died June 30, 2018. When K9 partners retire or pass away, their handlers and fellow comrades give them a full ceremony as they would a human soldier.

“They mean so much to us that they’re not animals, that they’re soldiers, and that we try to give them as much of a full retirement as a human would. We will do everything, from the flag folding, we come in our dress blues – it is an official ceremony where we have protocol, we have base commanders come in,” Keller said. “We make sure we pay the respects to them that they gave to us for all their service.”

Keller currently is going through firefighter training in the Air Force Reserves. This might develop into search-and-rescue work, she said.

“I really like having a partner with four legs. There’s just something about it.”